One of the tools we utilize when discussing the possible course of action to secure your financial future is known as the Personal Economic Model®. Much as a medical doctor would use an anatomical model to convey medical concepts, we use the following mode to convey financial concepts.

This model offers a visual representation of the way money flows through your hands. On the left, you will notice the Lifetime Capital Potential tank which illustrates that the amount of money you will control during your lifetime is both large, as well as finite. Once earned your money flows directly to the Tax Filter where the state and federal governments extract tax dollars due from earnings on your monthly cash flow. The after-tax balance is then directed to either your Current Lifestyle or your Future Lifestyle determined by your management of the Lifestyle Regulator. Determining the balance of cash flow between your current lifestyle desires and your future lifestyle requirement may be the most important financial decision you will ever make.

Each and every dollar that is allowed to flow through to your Current Lifestyle is consumed and gone forever. The goal is to accumulate enough money in the Savings and Investment tanks so that by the time you retire, the dollars in those tanks can then be used to satisfy your future lifestyle requirements. Position A would be to have enough in the tanks to live like you live today adjusted for inflation and have your money last at least to your life expectancy. That’s a win, but the icing on the cake would be to accomplish that with little to no impact on your present standard of living, and that is exactly what we strive to help our clients to do.

In working together, we can help you to address the following:

Let’s face it, we all buy things, and we will need to buy things our entire life. It’s not necessarily what we buy, but rather the way we choose to pay for them that can have a lasting impact on our financial well-being. Especially those things we call Major Capital Purchases. These are things that cannot be paid for in full with our regular monthly cash flow. Certainly, things like cars, vacations, weddings are major but a new set of tires for many Americans could be a major capital purchase as well. If you can’t pay for it in full you are going to have to finance it.

Let’s take a closer look at this with the graph below:

The first thing I want you to notice is the black line in the center. This is the Zero Line, and represents the point at which a person has nothing or owes nothing. When you owe more than you have accumulated you are below the zero line. Unfortunately living above the zero line takes more than a good job. 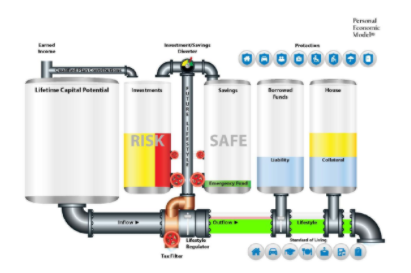 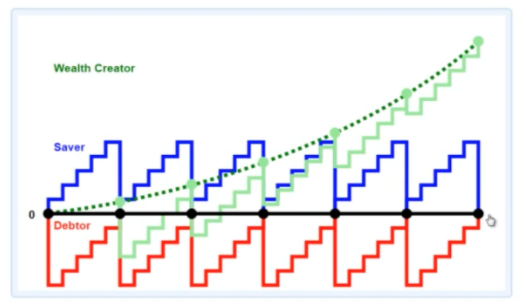 Let’s begin talking about The Debtor

The Debtor doesn’t have any savings or resources and is forced into borrowing. They borrow the money against their future earnings, and work toward paying it off and getting back to zero. They hope to have finished paying back what they owe before another need arises. They spend their lives working to pay for what they have already spent plus interest. The only way they can support their lifestyle depends on money they have yet to earn. This obligation on future earnings is one of the biggest problems with debt. It can be very depressing when you can’t see the way to even get back to zero. Another difficulty is that when you become a debtor to a creditor, you lose control. The creditor is then in control of your resources, not you.

The Saver, being well aware of the wealth transfers inherent in borrowing at interest, will postpone a purchase until they have saved enough to pay cash in full, up front. However, at the same time they make a purchase they also consume their savings and move back toward that zero line. A very precarious position indeed. A single unforeseen circumstance could lead to depleting their savings bringing them closer to the zero line. The saver constantly moves from having access to money and needing to save to get back to where they were before they had to spend their savings. They do not like to pay interest so the drain their accounts and kill compounding each time they do.

Paying cash seems to be the best way to pay for things because it avoids the necessity to pay interest but to pay cash you must also give up the ability to earn interest on those same dollars.

Another problem with paying cash is that first, you must save it which is not necessarily an easy thing to do. Depending on where you are saving those dollars, the government may also require that you pay taxes on the growth of that money. And when you do make a purchase not only do you consume those savings, but you also negate the ability of those dollars to earn interest because they have been spent. Many people choose to pay cash in order to avoid paying interest to a lender, which seems smart. However, the part that is often missed is that they are also losing interest they could have earned had they not had to pull dollars out of the account to make a purchase in the first place. But it’s not possible to keep the dollars in the account earning interest and still make the purchase, is it?

The Wealth Creator utilizes a unique approach. They also save, but when it is time to make a purchase they use their savings as collateral to secure a loan, preferably at a lower interest rate than they are earning on their money.. Now, there are a couple of key benefits here. The first is that this strategy keeps you from having to deplete your savings to make a purchase. At the same time, it allows those savings to continue to compound interest without interruption. Secondly, while the Wealth Creator does pay interest on the loan, they can often do so at negotiated rates. As the loan is repaid, the amount of savings available to be collateralized increases proportionately until the loan obligation is met. Compound interest works best over time uninterrupted. Resetting compounding on dollars we remove from accounts that are earning interest is not an efficient purchasing strategy.

We all want to make the most of the resources available to us; to be as efficient as we can be while also avoiding wealth transfers. Once a decision has been made to part with our dollars, it is permanent. Since we can never have those dollars back again, it makes sense to spend them wisely. To spend them in a way that fosters the creation of wealth, not the relinquishing of it. Let’s spend some time together to discuss how we might improve your purchasing efficiency.